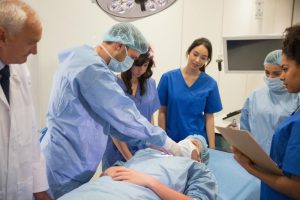 The New York University School of Medicine has announced plans to give every student a full ride. The university will now cover the annual tuition costs of $55,018 for current and future students, regardless of need or merit. About 90 first-year students and 350 students who have up to three years left before obtaining their degrees will be eligible for the program. The school says that it will refund out-of-pocket tuition payments and return loans already paid for the current year.

School officials have expressed concerns that rising tuition and sky-high loan balances are creating a shortage of researchers and primary care physicians. Because of that debt, those who do graduate choose to pursue high-paying specialties instead of lower-paying fields like primary care and pediatrics. Robert Grossman, dean of the NYU School of Medicine, said in a statement, “A population as diverse as ours is best served by doctors from all walks of life, we believe, and aspiring physicians and surgeons should not be prevented from pursuing a career in medicine because of the prospect of overwhelming financial debt.”

The move is a first among the nation’s major medical schools and may spur other top medical schools to follow suit. NYU has already raised more than $450 million of the roughly $600 million needed to fund the tuition package in perpetuity. Dr. Rafael Rivera, associate dean for admission and financial aid, said, “This is going to be a huge game-changer for us, for our students and for our patients.”

The majority of the roughly 20,000 students per year enrolled in American medical schools use federal loans to fund their studies. The Association of American Medical Colleges reports that about 72 percent of the class of 2017 had debt from medical school, holding a median of $180,000 in medical education debt. About 62 percent of NYU’s School of Medicine graduates have some debt when they graduate, with the average debt incurred by members of the class of 2017 standing at $184,000.