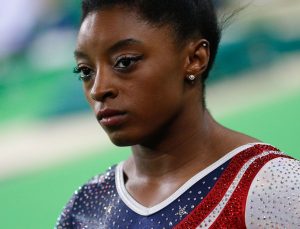 Simone Biles won a record-breaking fifth US all-around title at the US Gymnastics Championships. Biles also won gold in all four events: floor exercise, balance beam, vault, and uneven bars. According to Team USA, Biles is the first woman to win all five golds since Dominique Dawes in 1994. At 21, she is the first non-teen to win the US women’s all-around since 1971.

Biles wore a teal mint leotard in part to stand with fellow Larry Nassar sexual-abuse survivors. In January, Biles said she was one of Nassar’s more than 150 victims. Teal is the designated color for sexual abuse survivors. USA Gymnastics did not do anything to recognize the survivors of Nassar’s abuse at the event.

This was Biles second competition since her 23-month post-Olympics break. She took 14 months before returning to training last November and returned to competition three weeks ago. She is now expected to join the US team in October’s world championships in Qatar. The five-woman squad will be named after an October selection camp.

Biles is currently the most decorated US gymnast. She won four gold medals at the 2016 Olympics in Rio de Janeiro. Biles also has 14 world championship medals. At the US Gymnastics Championships, won her first national title on uneven bars, the only event on which she did not earn a medal in Rio or at any world championships.