Missouri Regulates What Can Be Called Meat 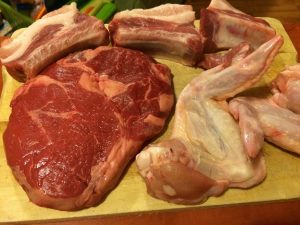 This week, Missouri becomes the first state in the country to have a law on the books that prohibits food makers from calling plant-based meat alternatives “meat.” The state law says that if a product doesn’t come from an actual cow, chicken, turkey or other animal with two or four feet, it can’t be marketed as meat. The Missouri Department of Agriculture is charged with investigating and referring potential violations to the Attorney General’s office or a county prosecutor. Violators may be fined $1,000 and imprisoned for a year.

The new law was part of a package of changes to state agriculture and conservation laws. That package was approved by wide margins in the House and Senate and was signed into law by then-Gov. Eric Greitens on June 1. Supporters say the measure will protect ranchers, pork producers and the state’s chicken and turkey farmers.

The law is already facing legal challenges. The company that makes Tofurky has filed an injunction in a Missouri federal court to prevent enforcement of the statute. The vegetarian food-maker wants to retain the right to describe its products with meat terminology such as “sausage” and “hot dogs,” saying that it would have to change its packaging if the law is allowed to stand. The law is being challenged as a violation of First Amendment rights.

Tofurky says that there should be no issue with using the terminology as long as the packaging makes clear what the ingredients are. It said in the lawsuit that the Missouri law could be used to go after a range of vegetarian products that use such terminology. The lawsuit also noted that there was no evidence of consumer confusion about the ingredients or source of plant-based meat substitutes before the statute went into effect. Mary Compton, a spokeswoman for Missouri Attorney General Josh Hawley, said her office will defend the law against Tofurky’s challenge.