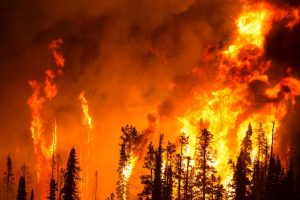 Southern California Edison said its equipment likely sparked one of the two starting points for the blaze. Witnesses reported a fire igniting along Koenigstein Road in Santa Paula near a SCE power pole. The other starting point for the fire was at Anlauf Canyon in Ventura County.

An official cause of the blaze has not yet been declared, but authorities hope to declare a cause by the end of November. The Ventura County Fire Department is leading an investigation by multiple public agencies. Ventura County fire Capt. Stan Ziegler said that investigators were looking at “every possibility.”

The massive Thomas fire devastated Ventura and Santa Barbara counties late last year. It ranks as the second-largest fire ever recorded in California history, burning more than 280,000 acres. Two deaths were attributed to the fire and 1,063 structures were destroyed. A month later, heavy rains caused mudslides on the hills left bare by the fire, killing 21 with two missing.

SCE faces multiple lawsuits in connection with the Thomas fire. Damages in the cases could exceed $1 billion, according to Joseph Liebman, a Santa Barbara attorney who represents victims of the fire.

This was yet another devastating blaze linked to a utility company’s equipment in recent years.
Strong winds have caused power lines to break and spark fires, leaving the companies on the hook for damages. Pacific Gas & Electric and San Diego Gas & Electric are both facing significant expenses related to past wildfires.

SCE now wants to spend $582 million on a series of improvements to its grid. Those improvements would include strengthening poles and insulating an estimated 600 miles of exposed power lines over the next two years. The money would also be used to upgrade technology to determine when winds put the power grid at risk. The cost of the improvements to ratepayers would be between 81 cents and $1.20 a month.