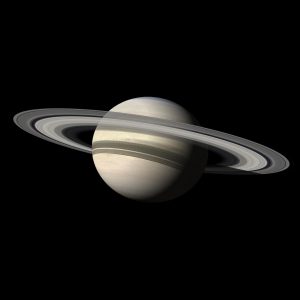 One of the most impressive features of Saturn is its iconic rings, icy bangles that stretch nearly 175,000 miles. Unfortunately, those rings won’t be around forever, according to new research released by NASA. In fact, the rings could be gone in as little as 100 million years. The research paper has been published in the journal Icarus.

Saturn rings are constantly being bombarded by radiation from the Sun and impacts from space rocks. This releases astronomical amounts of ice from the rings onto the planet. Current estimates suggests that 22,000 pounds of material falls from the rings every single second. If the rate of depletion remains constant as the researchers believe, the rings could completely gone within 300 million years or sooner.

James O’Donoghue, a space physicist at NASA’s Goddard Space Flight Center and lead author of the study, said in a statement, “We are lucky to be around to see Saturn’s ring system, which appears to be in the middle of its lifetime.” Saturn’s rings are estimated to be less than 100 million years old.

Earlier research based on data from the Cassini spacecraft estimated that the rings could be gone in as little as 100 million years. That data looked at a different type of inflow from the rings to the planet. O’Donoghue and his co-authors didn’t include that inflow in the estimates presented in their paper.

There are still a number of unknowns that make getting a more precise estimate impossible. Those unknowns include how much material is still in the rings, how Saturn’s shifting seasons affect the rate of depletion, and how the ring material is replenished.