Complete the form below to receive the latest headlines and analysts' recommendations for The Ensign Group with our free daily email newsletter:

The Ensign Group, Inc. (NASDAQ:ENSG) has earned an average recommendation of “Buy” from the nine ratings firms that are currently covering the company, Marketbeat reports. Three analysts have rated the stock with a hold rating, five have issued a buy rating and one has issued a strong buy rating on the company. The average 1-year target price among analysts that have issued a report on the stock in the last year is $53.43.

The Ensign Group (NASDAQ:ENSG) last released its earnings results on Wednesday, August 5th. The company reported $0.73 earnings per share for the quarter, topping analysts’ consensus estimates of $0.52 by $0.21. The firm had revenue of $584.70 million during the quarter, compared to the consensus estimate of $573.24 million. The Ensign Group had a return on equity of 20.42% and a net margin of 5.81%. On average, research analysts forecast that The Ensign Group will post 2.89 EPS for the current fiscal year.

The company also recently announced a quarterly dividend, which will be paid on Saturday, October 31st. Shareholders of record on Wednesday, September 30th will be paid a dividend of $0.05 per share. This represents a $0.20 annualized dividend and a yield of 0.36%. The ex-dividend date is Tuesday, September 29th. The Ensign Group’s dividend payout ratio (DPR) is currently 9.57%.

The Ensign Group, Inc provides health care services in the post-acute care continuum and other ancillary businesses. The company operates in three segments: Transitional and Skilled Services; Assisted and Independent Living Services; and Home Health and Hospice Services. The Transitional and Skilled Services segment offers a range of medical, nursing, rehabilitative, and pharmacy services, as well as routine services, such as daily dietary, social, and recreational services to Medicaid, private pay, managed care, and Medicare payors.

Read More: What is insider trading? 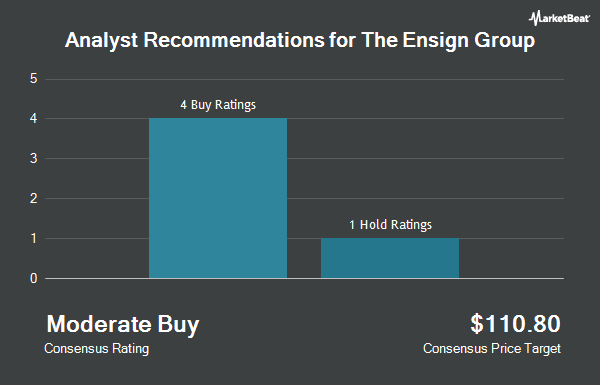