Principal Financial Group Inc. boosted its position in Black Hills Co. (NYSE:BKH) by 17.1% during the 1st quarter, according to the company in its most recent disclosure with the Securities and Exchange Commission. The fund owned 217,979 shares of the utilities provider’s stock after purchasing an additional 31,873 shares during the period. Principal Financial Group Inc.’s holdings in Black Hills were worth $14,554,000 as of its most recent SEC filing.

Black Hills (NYSE:BKH) last released its earnings results on Monday, May 3rd. The utilities provider reported $1.54 EPS for the quarter, missing the Zacks’ consensus estimate of $1.66 by ($0.12). The firm had revenue of $633.40 million during the quarter, compared to the consensus estimate of $610.87 million. Black Hills had a net margin of 12.87% and a return on equity of 8.69%. The firm’s revenue was up 17.9% compared to the same quarter last year. During the same period in the prior year, the company earned $1.59 EPS. Sell-side analysts predict that Black Hills Co. will post 3.88 earnings per share for the current fiscal year.

The company also recently announced a quarterly dividend, which was paid on Tuesday, June 1st. Investors of record on Tuesday, May 18th were paid a $0.565 dividend. The ex-dividend date was Monday, May 17th. This represents a $2.26 dividend on an annualized basis and a yield of 3.27%. Black Hills’s dividend payout ratio is presently 60.59%.

See Also: What are the risks of holding treasury bonds?

Want to see what other hedge funds are holding BKH? Visit HoldingsChannel.com to get the latest 13F filings and insider trades for Black Hills Co. (NYSE:BKH). 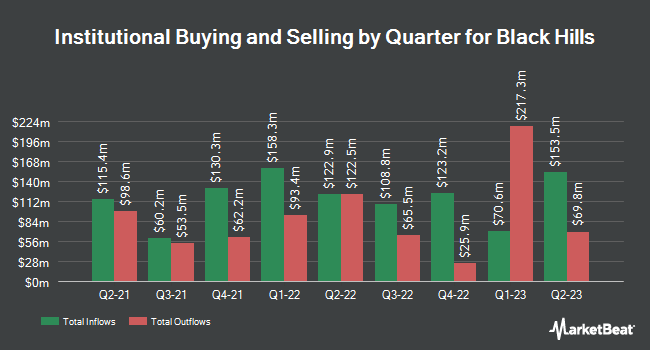 Complete the form below to receive the latest headlines and analysts' recommendations for Black Hills with our free daily email newsletter: