$123.80 Million in Sales Expected for Core Laboratories (NYSE:CLB) This Quarter

Wall Street analysts predict that Core Laboratories (NYSE:CLB) will announce sales of $123.80 million for the current fiscal quarter, according to Zacks Investment Research. Two analysts have made estimates for Core Laboratories’ earnings. The lowest sales estimate is $123.60 million and the highest is $124.00 million. Core Laboratories reported sales of $105.38 million during the same quarter last year, which would suggest a positive year over year growth rate of 17.5%. The business is expected to announce its next earnings results on Wednesday, October 20th.

On average, analysts expect that Core Laboratories will report full-year sales of $481.13 million for the current fiscal year, with estimates ranging from $478.00 million to $485.70 million. For the next fiscal year, analysts forecast that the company will post sales of $553.24 million, with estimates ranging from $544.00 million to $558.60 million. Zacks Investment Research’s sales calculations are a mean average based on a survey of sell-side research firms that cover Core Laboratories.

Core Laboratories (NYSE:CLB) last announced its quarterly earnings results on Wednesday, July 28th. The oil and gas company reported $0.18 earnings per share (EPS) for the quarter, missing analysts’ consensus estimates of $0.19 by ($0.01). The company had revenue of $118.75 million during the quarter, compared to the consensus estimate of $118.85 million. Core Laboratories had a net margin of 7.32% and a return on equity of 27.46%.

The firm also recently announced a quarterly dividend, which was paid on Tuesday, August 24th. Stockholders of record on Monday, August 9th were issued a $0.01 dividend. The ex-dividend date was Friday, August 6th. This represents a $0.04 dividend on an annualized basis and a dividend yield of 0.14%. Core Laboratories’s dividend payout ratio (DPR) is presently 5.00%.

Core Laboratories NV engages in the provision of proprietary and patented reservoir description, production enhancement, and reservoir management services to the oil and gas industry. It operates through the following business segments: Reservoir Description and Production Enhancement. The Reservoir Description segment encompasses the characterization of petroleum reservoir rock, fluid, and gas samples and provides analytical and field services to characterize properties of crude oil and petroleum products.

See Also: How to Use a Moving Average for Trading 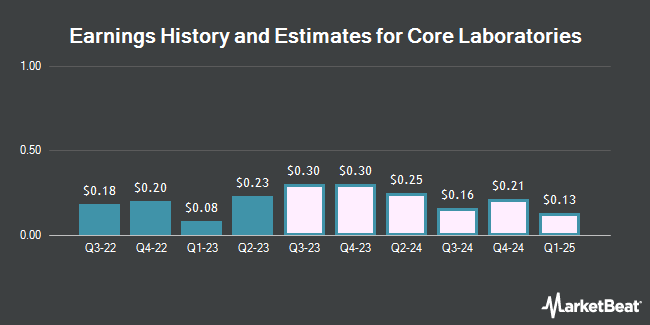 Complete the form below to receive the latest headlines and analysts' recommendations for Core Laboratories with our free daily email newsletter: