Kinross Gold Co. (NYSE:KGC) (TSE:K) has earned an average recommendation of “Buy” from the thirteen research firms that are currently covering the company, MarketBeat Ratings reports. Two analysts have rated the stock with a hold rating and nine have issued a buy rating on the company. The average twelve-month price target among brokerages that have issued ratings on the stock in the last year is $10.57.

Kinross Gold (NYSE:KGC) (TSE:K) last released its quarterly earnings results on Tuesday, July 27th. The mining company reported $0.12 EPS for the quarter, missing the Zacks’ consensus estimate of $0.13 by ($0.01). The business had revenue of $1 billion for the quarter, compared to analyst estimates of $1.02 billion. Kinross Gold had a return on equity of 15.18% and a net margin of 29.97%. Sell-side analysts predict that Kinross Gold will post 0.42 earnings per share for the current year.

The business also recently declared a quarterly dividend, which was paid on Thursday, September 2nd. Shareholders of record on Thursday, August 19th were paid a $0.03 dividend. The ex-dividend date was Wednesday, August 18th. This represents a $0.12 dividend on an annualized basis and a yield of 2.21%. Kinross Gold’s dividend payout ratio is 15.58%.

Kinross Gold Corp. operates as an exploration company. It engages in the production, acquisition, exploration and development of gold bearing properties in Canada, United States, the Russian Federation, Brazil, Ecuador, Chile, Ghana and Mauritania. The products are gold and silver produced in the form of dore.

Recommended Story: What is included in the gross domestic product? 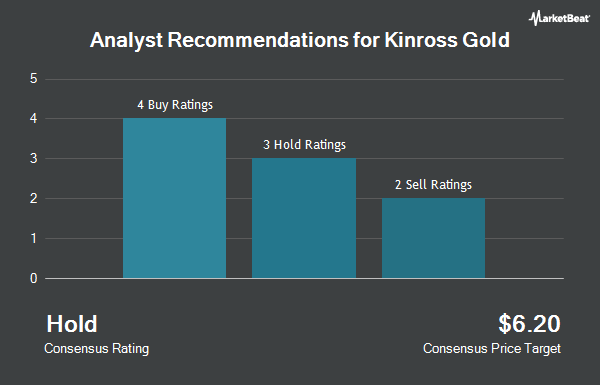 Complete the form below to receive the latest headlines and analysts' recommendations for Kinross Gold with our free daily email newsletter: