US Bancorp DE grew its holdings in 21Vianet Group, Inc. (NASDAQ:VNET) by 51.3% in the second quarter, according to its most recent disclosure with the SEC. The fund owned 3,296 shares of the information technology services provider’s stock after buying an additional 1,117 shares during the period. US Bancorp DE’s holdings in 21Vianet Group were worth $75,000 at the end of the most recent reporting period.

21Vianet Group (NASDAQ:VNET) last announced its quarterly earnings data on Monday, August 23rd. The information technology services provider reported $3.04 earnings per share (EPS) for the quarter, beating the consensus estimate of ($0.05) by $3.09. The business had revenue of $231.85 million for the quarter, compared to the consensus estimate of $228.01 million. 21Vianet Group had a negative net margin of 10.03% and a negative return on equity of 7.80%. Equities analysts expect that 21Vianet Group, Inc. will post 0.13 EPS for the current fiscal year.

21Vianet Group, Inc is a holding company, which engages in the provision of carrier-neutral internet data center services. Its services include interconnectivity, colocation or data center managed hosting services, and cloud services. The company was founded by Sheng Chen and Jun Zhang on October 16, 1999 and is headquartered in Beijing, China.

Further Reading: What is the yield curve?

Want to see what other hedge funds are holding VNET? Visit HoldingsChannel.com to get the latest 13F filings and insider trades for 21Vianet Group, Inc. (NASDAQ:VNET). 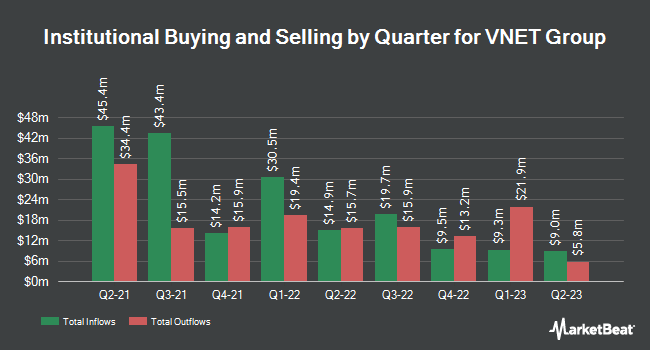 Complete the form below to receive the latest headlines and analysts' recommendations for 21Vianet Group with our free daily email newsletter: