BlackRock (NYSE:BLK) last released its earnings results on Tuesday, October 12th. The asset manager reported $10.95 earnings per share for the quarter, topping the consensus estimate of $9.81 by $1.14. BlackRock had a return on equity of 16.30% and a net margin of 30.39%. The business had revenue of $5.05 billion during the quarter, compared to the consensus estimate of $4.82 billion. During the same period last year, the company earned $9.22 earnings per share. The business’s revenue for the quarter was up 15.6% compared to the same quarter last year.

In other news, General Counsel Christopher J. Meade sold 2,106 shares of the business’s stock in a transaction dated Tuesday, July 20th. The stock was sold at an average price of $877.24, for a total transaction of $1,847,467.44. The sale was disclosed in a document filed with the SEC, which is accessible through this hyperlink. 1.16% of the stock is currently owned by insiders.

The firm also recently declared a quarterly dividend, which was paid on Wednesday, September 22nd. Stockholders of record on Tuesday, September 7th were paid a dividend of $4.13 per share. The ex-dividend date was Friday, September 3rd. This represents a $16.52 dividend on an annualized basis and a dividend yield of 1.90%. BlackRock’s payout ratio is 48.85%. 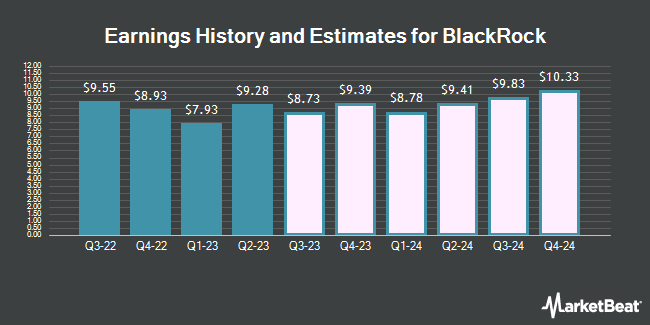 Complete the form below to receive the latest headlines and analysts' recommendations for BlackRock with our free daily email newsletter: