Jump Financial LLC decreased its stake in Gerdau S.A. (NYSE:GGB) by 53.8% during the second quarter, according to its most recent disclosure with the Securities & Exchange Commission. The fund owned 153,511 shares of the basic materials company’s stock after selling 179,040 shares during the quarter. Jump Financial LLC’s holdings in Gerdau were worth $905,000 as of its most recent SEC filing.

Gerdau (NYSE:GGB) last announced its earnings results on Sunday, October 3rd. The basic materials company reported $1.96 EPS for the quarter, missing analysts’ consensus estimates of $2.27 by ($0.31). Gerdau had a net margin of 19.01% and a return on equity of 35.05%. As a group, research analysts anticipate that Gerdau S.A. will post 1.31 EPS for the current fiscal year.

The company also recently announced a Variable dividend, which will be paid on Tuesday, November 23rd. Shareholders of record on Thursday, September 30th will be issued a dividend of $0.0814 per share. The ex-dividend date of this dividend is Wednesday, September 29th. This represents a dividend yield of 7.2%. This is a boost from Gerdau’s previous Variable dividend of $0.01. Gerdau’s dividend payout ratio is presently 111.11%. 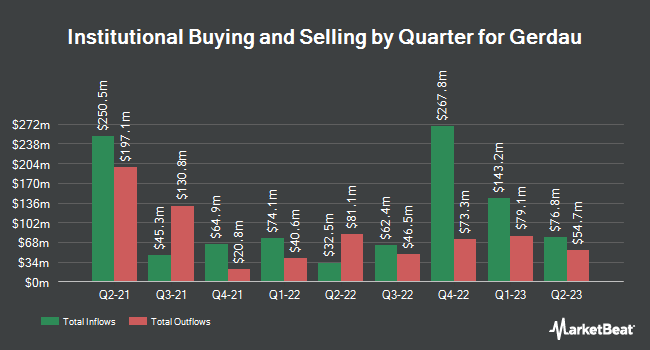 Receive News & Ratings for Gerdau Daily - Enter your email address below to receive a concise daily summary of the latest news and analysts' ratings for Gerdau and related companies with MarketBeat.com's FREE daily email newsletter.

NuShares Price Down 41.2% This Week

Complete the form below to receive the latest headlines and analysts' recommendations for Gerdau with our free daily email newsletter: