$48.54 Million in Sales Expected for Landec Co. (NASDAQ:LNDC) This Quarter

Wall Street analysts forecast that Landec Co. (NASDAQ:LNDC) will report $48.54 million in sales for the current fiscal quarter, Zacks reports. Two analysts have issued estimates for Landec’s earnings, with the highest sales estimate coming in at $48.58 million and the lowest estimate coming in at $48.50 million. Landec reported sales of $137.78 million in the same quarter last year, which indicates a negative year-over-year growth rate of 64.8%. The business is expected to issue its next quarterly earnings results on Wednesday, April 6th.

In other news, Director Joshua Schechter purchased 8,000 shares of the business’s stock in a transaction on Wednesday, January 12th. The shares were acquired at an average cost of $10.39 per share, with a total value of $83,120.00. The transaction was disclosed in a legal filing with the Securities & Exchange Commission, which is available at this hyperlink. 13.16% of the stock is currently owned by insiders.

Landec Corp. engages in the design, development, manufacture, and sale of health and wellness products for food and biomaterials markets. It operates through the following segments: Curation Foods, Lifecore, and Others. The Curation Foods segment includes activities to market and pack specialty packaged whole and fresh-cut fruit and vegetables. 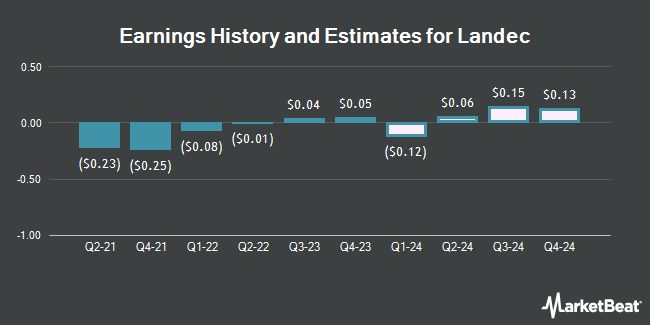 Receive News & Ratings for Landec Daily - Enter your email address below to receive a concise daily summary of the latest news and analysts' ratings for Landec and related companies with MarketBeat.com's FREE daily email newsletter.

Swiss Re Upgraded by Societe Generale to “Buy”

$12.86 Billion in Sales Expected for Performance Food Group This Quarter

Complete the form below to receive the latest headlines and analysts' recommendations for Landec with our free daily email newsletter: