Teradata (NYSE:TDC) had its target price cut by Barclays from $50.00 to $43.00 in a research note published on Wednesday, The Fly reports.

Teradata (NYSE:TDC) last announced its earnings results on Thursday, November 4th. The technology company reported $0.43 earnings per share (EPS) for the quarter, beating the consensus estimate of $0.33 by $0.10. The company had revenue of $460.00 million during the quarter, compared to analyst estimates of $455.45 million. Teradata had a net margin of 6.16% and a return on equity of 39.29%. The firm’s quarterly revenue was up 1.3% compared to the same quarter last year. During the same period in the previous year, the business posted $0.24 earnings per share. As a group, analysts expect that Teradata will post 1.38 earnings per share for the current year.

Teradata Corp. is the cloud data analytics company. It is built for a multi-cloud reality and solving the data challenges at scale. The company was founded on July 13, 1979 and is headquartered in San Diego, CA. 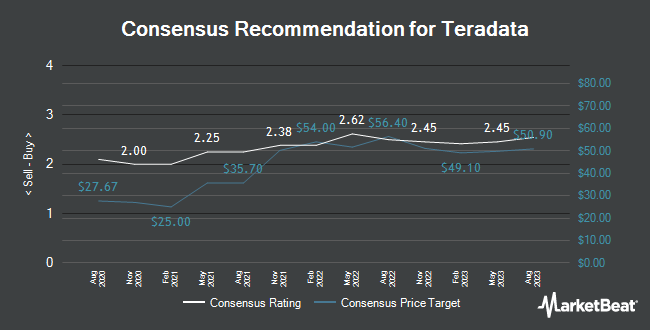 Receive News & Ratings for Teradata Daily - Enter your email address below to receive a concise daily summary of the latest news and analysts' ratings for Teradata and related companies with MarketBeat.com's FREE daily email newsletter.

ServiceNow PT Lowered to $657.00 at Citigroup

Complete the form below to receive the latest headlines and analysts' recommendations for Teradata with our free daily email newsletter: