IRadimed Co. (NASDAQ:IRMD) CEO Roger E. Susi sold 10,000 shares of the company’s stock in a transaction dated Tuesday, January 11th. The shares were sold at an average price of $44.54, for a total value of $445,400.00. The sale was disclosed in a document filed with the SEC, which can be accessed through this link.

IRadimed (NASDAQ:IRMD) last announced its quarterly earnings data on Thursday, October 28th. The medical equipment provider reported $0.23 earnings per share for the quarter, beating analysts’ consensus estimates of $0.17 by $0.06. The business had revenue of $10.91 million for the quarter, compared to analyst estimates of $10.39 million. IRadimed had a return on equity of 9.44% and a net margin of 15.77%. During the same period in the prior year, the company earned $0.09 earnings per share. On average, equities analysts expect that IRadimed Co. will post 0.62 earnings per share for the current year.

IRadimed Corp. engages in the development, manufacture, marketing, and distribution of Magnetic Resonance Imaging (MRI) compatible medical devices. It also provides non-magnetic Intravenous (IV) infusion pump system that is specifically designed for use during MRI procedures. The company was founded by Roger Susi in July 1992 and is headquartered in Winter Springs, FL.

Featured Article: What is a Real Estate Investment Trust (REIT)? 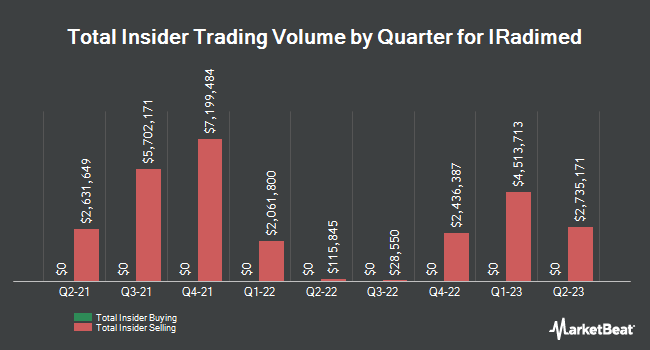 Receive News & Ratings for IRadimed Daily - Enter your email address below to receive a concise daily summary of the latest news and analysts' ratings for IRadimed and related companies with MarketBeat.com's FREE daily email newsletter.

Swiss Re Upgraded by Societe Generale to “Buy”

Complete the form below to receive the latest headlines and analysts' recommendations for IRadimed with our free daily email newsletter: