UGI Co. (NYSE:UGI) Director John L. Walsh sold 78,500 shares of the stock in a transaction that occurred on Tuesday, January 11th. The stock was sold at an average price of $45.09, for a total transaction of $3,539,565.00. The transaction was disclosed in a legal filing with the SEC, which can be accessed through this link.

UGI (NYSE:UGI) last announced its quarterly earnings data on Thursday, November 18th. The utilities provider reported ($0.33) earnings per share for the quarter, missing the Zacks’ consensus estimate of ($0.26) by ($0.07). UGI had a net margin of 19.70% and a return on equity of 12.91%. The firm had revenue of $1.44 billion during the quarter, compared to analyst estimates of $1.26 billion. During the same quarter in the previous year, the business posted ($0.14) earnings per share. UGI’s revenue for the quarter was up 27.9% compared to the same quarter last year. On average, analysts predict that UGI Co. will post 3.25 earnings per share for the current fiscal year.

The business also recently declared a quarterly dividend, which was paid on Saturday, January 1st. Investors of record on Wednesday, December 15th were paid a dividend of $0.345 per share. The ex-dividend date of this dividend was Tuesday, December 14th. This represents a $1.38 annualized dividend and a yield of 2.98%. UGI’s dividend payout ratio is currently 19.97%.

UGI Corp. operates as a holding company that engages in the distribution, storage, transport, and marketing of energy products and services. It operates through the following segments: AmeriGas Propane; UGI International; Midstream and Marketing; and UGI Utilities. The AmeriGas Propane segment consists of the propane distribution business of AmeriGas Partners, L.P.

See Also: What is an economic bubble? 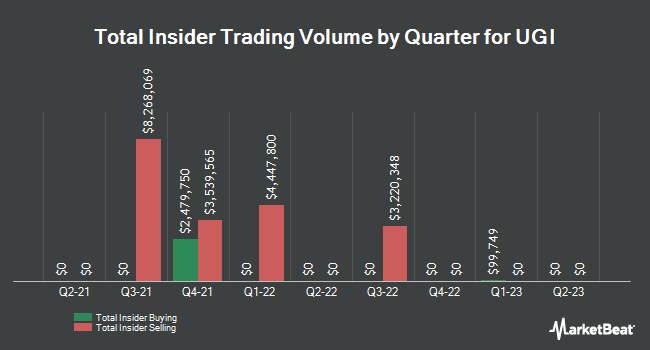 Receive News & Ratings for UGI Daily - Enter your email address below to receive a concise daily summary of the latest news and analysts' ratings for UGI and related companies with MarketBeat.com's FREE daily email newsletter.

Complete the form below to receive the latest headlines and analysts' recommendations for UGI with our free daily email newsletter: