Winfield Associates Inc. boosted its holdings in Affirm Holdings, Inc. (NASDAQ:AFRM – Get Rating) by 153.4% during the fourth quarter, according to its most recent Form 13F filing with the SEC. The fund owned 5,232 shares of the company’s stock after acquiring an additional 3,167 shares during the period. Winfield Associates Inc.’s holdings in Affirm were worth $526,000 at the end of the most recent reporting period.

Affirm (NASDAQ:AFRM – Get Rating) last announced its quarterly earnings data on Thursday, May 12th. The company reported ($0.19) EPS for the quarter, topping analysts’ consensus estimates of ($0.54) by $0.35. Affirm had a negative net margin of 74.96% and a negative return on equity of 22.95%. The business had revenue of $354.80 million for the quarter, compared to analyst estimates of $344.01 million. During the same quarter in the previous year, the firm posted ($0.72) earnings per share. The firm’s revenue for the quarter was up 53.8% on a year-over-year basis. Equities analysts predict that Affirm Holdings, Inc. will post -2.77 EPS for the current year.

In other news, major shareholder Private Ltd Gic acquired 1,091,738 shares of Affirm stock in a transaction on Thursday, April 21st. The shares were purchased at an average cost of $33.33 per share, for a total transaction of $36,387,627.54. Following the completion of the purchase, the insider now directly owns 2,785,714 shares of the company’s stock, valued at approximately $92,847,847.62. The transaction was disclosed in a document filed with the SEC, which is accessible through this link. Over the last quarter, insiders acquired 2,107,799 shares of company stock worth $68,998,013. Corporate insiders own 16.48% of the company’s stock.

Affirm Holdings, Inc operates a platform for digital and mobile-first commerce in the United States and Canada. The company's platform includes point-of-sale payment solution for consumers, merchant commerce solutions, and a consumer-focused app. Its payments network and partnership with an originating bank, enables consumers to pay for a purchase over time with terms ranging from one to forty-eight months. 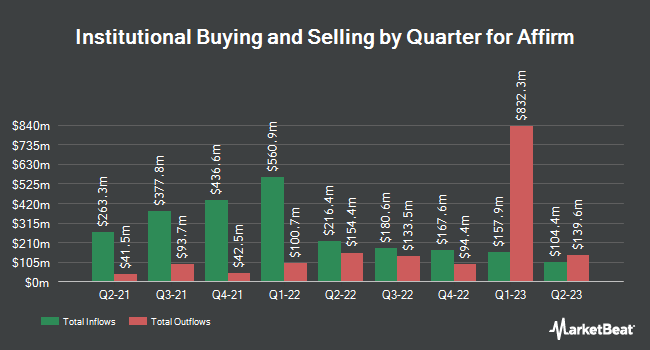 Receive News & Ratings for Affirm Daily - Enter your email address below to receive a concise daily summary of the latest news and analysts' ratings for Affirm and related companies with MarketBeat.com's FREE daily email newsletter.

Complete the form below to receive the latest headlines and analysts' recommendations for Affirm with our free daily email newsletter: