Noodles & Company (NASDAQ:NDLS) Given Average Rating of “Buy” by Brokerages

Noodles & Company (NASDAQ:NDLS – Get Rating) has earned a consensus recommendation of “Buy” from the nine analysts that are presently covering the firm, MarketBeat.com reports. Three analysts have rated the stock with a hold rating and four have issued a buy rating on the company. The average 12 month target price among brokerages that have issued ratings on the stock in the last year is $11.20.

In other news, Director Jeffrey W. Jones bought 29,000 shares of the firm’s stock in a transaction that occurred on Monday, February 28th. The shares were acquired at an average price of $6.90 per share, with a total value of $200,100.00. The acquisition was disclosed in a filing with the SEC, which is available at the SEC website. Corporate insiders own 2.10% of the company’s stock.

Noodles & Company (NASDAQ:NDLS – Get Rating) last released its quarterly earnings results on Wednesday, April 27th. The restaurant operator reported ($0.13) earnings per share for the quarter, topping the consensus estimate of ($0.17) by $0.04. Noodles & Company had a negative net margin of 0.16% and a positive return on equity of 4.04%. During the same quarter in the previous year, the firm earned ($0.02) EPS. Research analysts predict that Noodles & Company will post 0.13 EPS for the current year.

About Noodles & Company (Get Rating)

Noodles & Company, a restaurant concept company, develops and operates fast-casual restaurants. It offers cooked-to-order dishes, including noodles and pasta, soups, salads, and appetizers. As of December 28, 2021, the company operated 448 restaurants in 29 states, which included 372 company locations and 76 franchise locations. 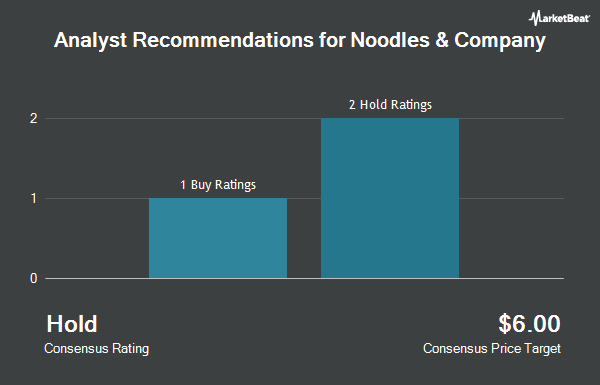 Complete the form below to receive the latest headlines and analysts' recommendations for Noodles & Company with our free daily email newsletter: