Several other research analysts have also weighed in on AQN. National Bank Financial lowered shares of Algonquin Power & Utilities from an “outperfrom under weight” rating to a “sector perform under weight” rating in a research note on Tuesday, May 3rd. National Bankshares downgraded shares of Algonquin Power & Utilities to a “hold” rating in a report on Wednesday, May 4th. Four investment analysts have rated the stock with a hold rating, three have issued a buy rating and one has assigned a strong buy rating to the stock. Based on data from MarketBeat, the company currently has an average rating of “Moderate Buy” and an average target price of C$19.67.

In other Algonquin Power & Utilities news, Senior Officer Jennifer Sara Tindale sold 7,500 shares of the business’s stock in a transaction dated Monday, June 6th. The shares were sold at an average price of C$18.58, for a total value of C$139,350.00. Following the completion of the sale, the insider now owns 31,507 shares of the company’s stock, valued at approximately C$585,400.06.

Algonquin Power & Utilities Corp., through its subsidiaries, owns and operates a portfolio of regulated and non-regulated generation, distribution, and transmission utility assets in Canada, the United States, Chile, and Bermuda. It generates and sells electrical energy through renewable and clean energy power generation facilities. 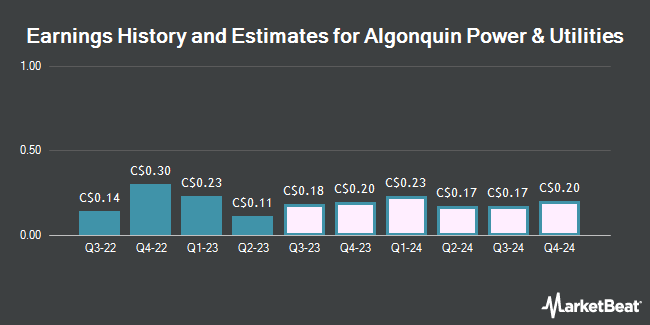 Etherlite Trading Down 58.1% This Week

Complete the form below to receive the latest headlines and analysts' recommendations for Algonquin Power & Utilities with our free daily email newsletter: