Navellier & Associates Inc. trimmed its holdings in Star Bulk Carriers Corp. (NASDAQ:SBLK – Get Rating) by 2.3% in the 2nd quarter, according to its most recent disclosure with the Securities & Exchange Commission. The institutional investor owned 43,135 shares of the shipping company’s stock after selling 997 shares during the period. Navellier & Associates Inc.’s holdings in Star Bulk Carriers were worth $1,078,000 as of its most recent SEC filing.

The company also recently announced a quarterly dividend, which will be paid on Monday, December 12th. Stockholders of record on Wednesday, November 30th will be issued a $1.20 dividend. This represents a $4.80 annualized dividend and a dividend yield of 23.76%. The ex-dividend date is Tuesday, November 29th. Star Bulk Carriers’s payout ratio is 86.61%.

Star Bulk Carriers Corp., a shipping company, engages in the ocean transportation of dry bulk cargoes worldwide. The company's vessels transport a range of major bulks, including iron ores, coal, and grains, as well as minor bulks, such as bauxite, fertilizers, and steel products. As of December 31, 2021, it had a fleet of 128 vessels with an aggregate capacity of approximately 14.1 million deadweight tons, including 17 Newcastlemax, 24 Capesize, 7 Post Panamax, 41 Kamsarmax, 2 Panamax, 20 Ultramax, and 17 Supramax vessels. 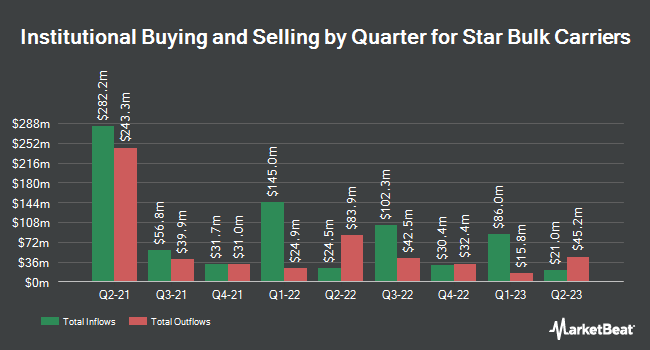 Contrasting BuzzFeed and The Competition

Complete the form below to receive the latest headlines and analysts' recommendations for Star Bulk Carriers with our free daily email newsletter: