Chubb (NYSE:CB – Get Rating) is set to announce its earnings results after the market closes on Tuesday, January 31st. Analysts expect the company to announce earnings of $4.22 per share for the quarter. Investors interested in registering for the company’s conference call can do so using this link.

Chubb (NYSE:CB – Get Rating) last announced its quarterly earnings results on Tuesday, October 25th. The financial services provider reported $3.17 earnings per share (EPS) for the quarter, topping the consensus estimate of $3.02 by $0.15. Chubb had a return on equity of 11.89% and a net margin of 14.70%. The company had revenue of $10.75 billion during the quarter, compared to the consensus estimate of $10.71 billion. During the same period in the prior year, the company earned $2.64 earnings per share. The company’s revenue for the quarter was up 8.5% compared to the same quarter last year. On average, analysts expect Chubb to post $15 EPS for the current fiscal year and $17 EPS for the next fiscal year.

The company also recently disclosed a quarterly dividend, which was paid on Friday, January 6th. Stockholders of record on Friday, December 16th were given a dividend of $0.83 per share. The ex-dividend date was Thursday, December 15th. This represents a $3.32 annualized dividend and a dividend yield of 1.45%. Chubb’s dividend payout ratio is currently 23.15%.

Hedge Funds Weigh In On Chubb 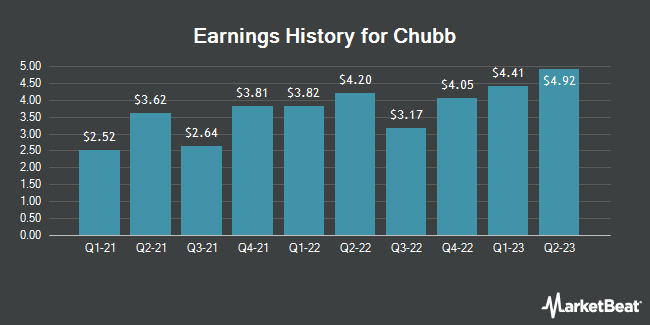 Receive News & Ratings for Chubb Daily - Enter your email address below to receive a concise daily summary of the latest news and analysts' ratings for Chubb and related companies with MarketBeat.com's FREE daily email newsletter.

Complete the form below to receive the latest headlines and analysts' recommendations for Chubb with our free daily email newsletter: