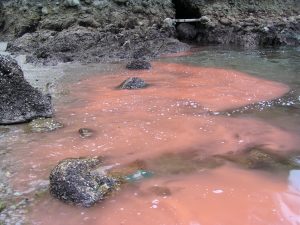 Coastal regions in Southwest Florida are seeing thousands of animals die due to an unusually severe “red tide”. A red tide is a rapid bloom of a toxic algae called Karenia brevis, or K. brevis, in the ocean that is large enough to discolor the water red, brown or green. The algae contains harmful toxins that can affect the nervous systems of fish, birds and mammals. The algae blooms stretch over 150 miles this year.

Red tides occur annually, typically appearing in November and disappearing by late spring. The current red tide hitting southwest Florida has now lasted for nine months. With November quickly approaching and the algae blooms showing no signs of abating, some experts are concerned that this red tide could last into 2019.

Severe, persistent red tides have a devastating effect on marine wildlife. If the microorganisms are concentrated at more than a 10,000-cell-per-liter rate, fish of all kinds can start dying. In recent weeks, Florida beaches have been littered with thousands of dead fish and eels, as well as roughly 400 turtles, 80 manatees, numerous sharks, and a 26-foot whale shark.

The National Weather Services has issued a Beach Hazards Statement for areas along the Gulf Coast most affected by the red tide. Currently, it’s affecting Lee County, Sarasota County, Charlotte County and Collier County. Beaches are shut down and some local businesses have temporarily closed.

Inhaling the red tide toxins can cause coughing, sneezing, and teary eyes in humans. Those with chronic respiratory issues like asthma are advised to avoid the affected areas. Consuming contaminated fish or shellfish can cause abdominal pain, vomiting, and neurological effects. There have been published reports of people recently treated at emergency rooms in the area for symptoms consistent with algae toxins.

There’s no telling how long this red tide could last. It is being called the worst red tide to hit the area in a decade. That bloom lasted 17 months after beginning in 2006.