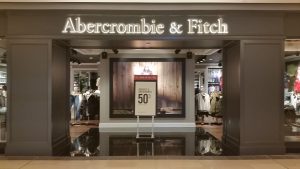 Abercrombie & Fitch (NYSE: ANF) reported quarterly earnings and sales for the third quarter of its fiscal year that topped Wall Street expectations. CEO Fran Horowitz was happy with the results, saying during the earnings announcement, “We are pleased with our third quarter performance, our fifth consecutive quarter of positive comparable sales, with growth across both of our brands.”

Abercrombie & Fitch delivered strong same-store sales for the third quarter. Sales at stores open for at least 12 months were up 3 percent, outpacing the 1.6 percent increase Wall Street was looking for. Same-store sales were up 6 percent in the U.S., while they were down 3 percent internationally.

The company’s flagship business and its Hollister brand both recorded solid quarters. Same-store sales at Hollister were up 4 percent for the quarter, while sales at Abercrombie increased 1 percent. Horowitz said the retailer recorded record sales between Thanksgiving Day and Cyber Monday.

The company’s shares surged nearly 25 percent after the release of the results. Before the stock surge, Abercrombie & Fitch shares had been down about 3 percent from a year ago.