ISS Gets Christmas Delivery From SpaceX 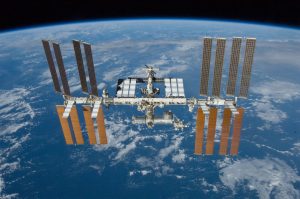 A special delivery has arrived at the International Space Station (ISS) just in time for the holidays. A SpaceX Dragon cargo ship delivered more than 5,600 pounds of fresh supplies, including a variety of holiday treats. The spacecraft is also carrying a wide range of science gear needed for 250 planned experiments, along with a team of space-traveling mice and 36,000 worms.

Station commander Alexander Gerst of the European Space Agency and the rest of the crew are in for a treat. NASA spokesperson Leah Cheshier said, “On this resupply craft, they also have some special things like candied yams, green bean casserole, and even some Christmas cookies.” The holiday food also includes smoked turkey, cranberry sauce and fruitcake.

Six Expedition 57 astronauts are currently on the space station. Three of the orbiting lab’s residents will be on board for Christmas, while the other three are scheduled to return to Earth on Dec. 20. The Dragon will be the sixth spacecraft to link up with the space station in recent months. The others are a Northrop Grumman Antares cargo ship, two Russian Soyuz crew spacecraft, and two Russian uncrewed Progress cargo ships.

SpaceX launched the Dragon spacecraft from the Cape Canaveral Air Force Station in Florida last Wednesday. A communications glitch between a satellite and a ground station in White Sands, New Mexico briefly delayed its arrival to the ISS. It was forced to make a new approach about an hour later than planned. The capsule was then captured with a robotic arm after being guided close to the space station by flight controllers at NASA’s Mission Control center in Houston.

The delivery is the 16th cargo delivery mission for NASA by SpaceX. The Dragon on this flight, called CRS-16, previously delivered supplies to the station in February 2017 as part of NASA’s CRS-10 mission. This time, it will spend about a month at the space station before returning to Earth filled with about 4,000 pounds of experiment results and other gear.