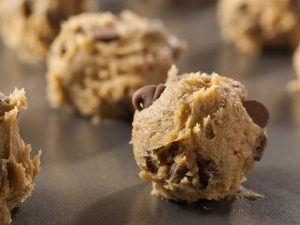 It’s that time of year again, the time when many families break out their Christmas cookie recipes and make goodies for the ones they love. Sadly, many Christmas cookies never make it from the mixing bowl to the oven, eaten as raw dough by blissful consumers. This trend has prompted the Centers for Disease Control and Prevention to once again issue their annual warning about the dangers of eating unbaked cookie dough.

The CDC wrote on a special web page dedicated to the issue, “When you prepare homemade cookie dough, cake mixes, or even bread, you may be tempted to taste a bite before it is fully cooked. But steer clear of this temptation — eating or tasting unbaked products that are intended to be cooked, such as dough or batter, can make you sick.” The U.S. Department of Agriculture’s Food Safety and Inspection Service typically echoes the CDC on the matter.

According to the CDC, there is a potential problem with two of the primary ingredients generally used to make Christmas cookies: flour and eggs. Because flour is derived from a grain that comes directly from the field, it is typically not treated to kill bacteria. Some raw flour can be contaminated with Escherichia coli (E. coli), which would be killed during the cooking process but viable before the dough is cooked. The CDC reports that more than 60 people across the United States were sickened with E. coli from raw flour in 2016.

Raw eggs are a known carrier of salmonella bacteria. Symptoms from E. coli infection and salmonella infection are similar and typically appear within several days. Those symptoms may include severe stomach pain, diarrhea and vomiting. In most cases, patients usually recover within less than a week but for some patients, these illnesses can cause life-threatening health issues and death.

To avoid potential infection, the CDC recommends not eating raw cookie dough at all, not even a tiny taste. The CDC is also cautioning people to thoroughly wash their hands with warm, soapy water and to clean all work surfaces, dishes, and utensils when working with raw eggs and flour.