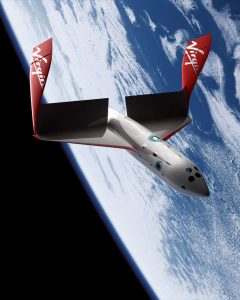 Virgin Galactic’s milestone test flight for its supersonic space plane officially reached the edge of space before turning around and touching back down to Earth. The rocket-powered plane, VSS Unity, reached a maximum altitude of 51.4 miles, higher than the 50-mile mark recognized by the US government as being the edge of space. Richard Branson, Virgin Galactic’s founder, commented, “Today for the first time in history, a crewed spaceship built to carry private passengers reached space.”

The test flight also carried a flight test dummy and four research payloads from NASA’s Flight Opportunities Program. The items were used to help simulate the weight distribution of having passengers on board.

At an altitude of about 43,000 feet, VSS Unity’s pilots released the craft from the mothership and initiated a 60-second burst from its rocket engine to send the vehicle directly upward at nearly three times the speed of sound. After reaching its maximum altitude, the spacecraft turned around and descended back to Earth to land at Mojave.

The successful test flight brings the company one step closer to sending tourists to space, a goal Virgin Galactic has worked toward since it was founded in 2004. The company could be just months away from taking up its first load of tourists. Virgin Galactic says about 600 people have already reserved tickets, which are priced between $200,000 and $250,000.

The test flight was also the first revenue-earning mission for Virgin Galactic. Branson said during his remarks, “… having our first money coming back is a good feeling…We’ve got to make this a profitable venture, and I think we can make it a profitable venture.”