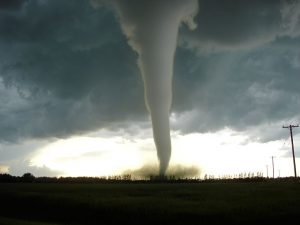 Scientists researching the formation of tornadoes have made a surprising discovery. They found that instead of funnel clouds gradually descending until they make contact with the ground, tornadoes may form from the ground up. The team presented their research at the 2018 meeting of the American Geophysical Union.

Historically, tornadoes have been thought to originate in the clouds. Research conducted in the 1970s reached the conclusion that tornadoes form from rotation that starts more than a mile above the Earth’s surface. Weather forecasters typically issue tornado warnings based on radar observations of strong rotation above the ground. The new findings suggest forecasters must re-evaluate their warning procedure.

A team of climatologists led by meteorologist Jana Houser from Ohio University obtained comprehensive data on tornadoes born from supercell storms using a rapid-scanning mobile Doppler radar. The radar system collected tornado wind speeds every 30 seconds. This data was compared with hundreds of still photos and videos of the tornadoes from citizens and fellow storm chasers. The images clearly showed a visible tornado at the ground several minutes before the radar picked it up.

Data sets from four tornadoes showed similar patterns of rotation on the ground before it materialized in the clouds. One showed rotation at a multiple different elevations simultaneously. The researchers wrote: “It appears that in many cases, tornadic-strength rotation develops either at near-ground levels first, or contemporaneously throughout the depth of the tornado-bearing layer.”

Having more evidence of how tornadoes form could help save lives. An average of more than 1,000 tornadoes are recorded in the U.S. every year, killing hundreds, injuring thousands, and causing billions of dollars in damage to homes and businesses. Four is a pretty small sample size, so more data and data analysis will probably be required before any solid conclusions can be drawn.